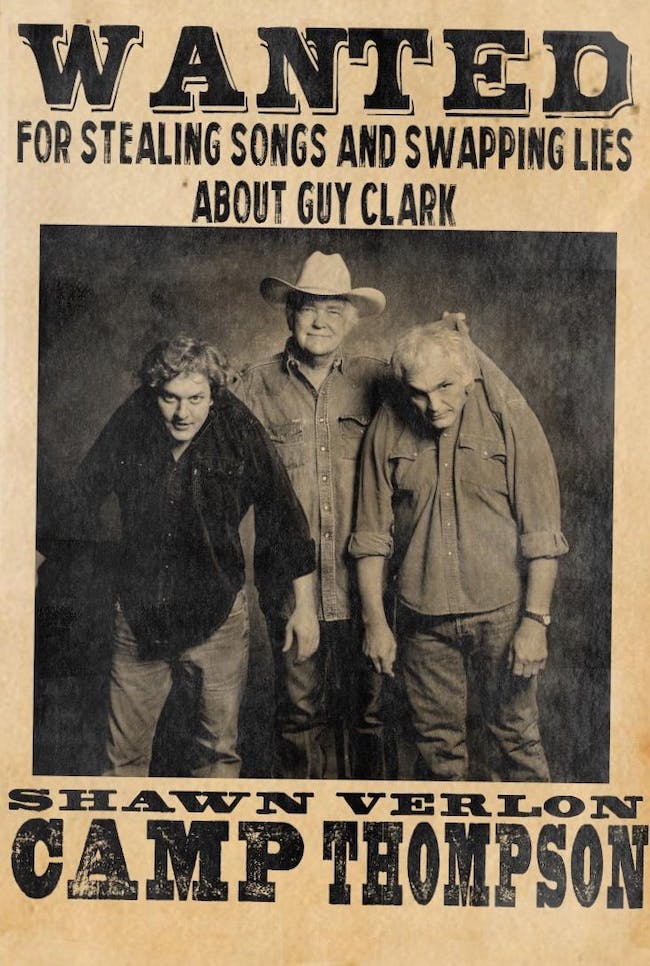 For more than forty years, Texas troubadour Guy Clark wrote and recorded unforgettable songs. The gravel-voiced troubadour who crafted a vast catalog of emotionally charged, intricately detailed works that illuminated and expanded the literary possibilities of popular song served as model, mentor, supporter, and friend to at least two generations of the world’s most talented and influential singer-songwriters. He blended high wit with pure poetry and turned it into timeless, vibrantly visual songs. Clark’s poetic mastery has given voice to a vision of life, love, and trouble that has resonated not only with fans of Americana music, but also with the prominent artists—including Johnny Cash, Ricky Skaggs, Jerry Jeff Walker, and others—who have recorded and performed Clark’s music.

Sadly, we lost Guy Clark in 2017, and now it’s up to those who knew and loved him to carry on his music. It’s hard to think of any two musicians more qualified to do so than Verlon Thompson, who co-wrote and toured with Clark as his guitar accompanist for decades, and Shawn Camp, a close friend and songwriting partner in Nashville.

“The longtime sideman of the legendary Guy Clark is now a solo performer with great versatility. Verlon Thompson's performances weave stories and songs into a captivating patchwork that fans can't get enough of. Nearly every VT show ends in a standing ovation, but the spotlight is always lovingly shared with the long shadow of the late Guy Clark

Thompson's newest venture was practically pre-ordained. Along with friend and collaborator Shawn Camp, Thompson trades tunes and tales in tribute to his many years on the road with Hall of Fame songwriter Guy Clark. To sweeten the deal, both Thompson and Camp are virtuoso guitar players, with a lively banter and keen sense of comic timing.

“It was just another one of Guy Clark’s keen ideas to introduce the “Okie” and “Arkansawyer.” He knew them both well but they didn’t know each other when they all took the stage that night in Little Rock more than twenty years ago. With Camp on his left and Thompson on his right, Guy broke into “Texas Cookin’.” When the smoke cleared a couple of hours later, a strong and steady friendship was born.

Thompson continued performing with Guy Clark on the road with Camp joining them when he wasn’t busy writing hit songs and touring behind his own releases. Guy always said he’d “hire Shawn full time if I could afford him!”

The names Camp and Thompson appear on many Guy Clark recordings as well. Thompson collaborated with Clark on the title track of the 1992 “Boats to Build” album and shared co-producer credits on several projects including “Workbench Songs” and “Somedays the Song Writes You”, both Grammy nominated for Best Contemporary Folk album.

Camp won the Americana Album of the Year Award for co-producing “This One’s For Him: A Tribute to Guy Clark” and then went on to win a Grammy for producing Clark’s “My Favorite Picture Of You”.

So you get the idea. These two “yayhoos,” as Guy called them, have spent a big part of their lives in the trenches with Guy Clark...supporting him, learning from him and loving him. Now they’ve decided to come together in performance to share some special memories and the unforgettable music of their old friend.” -