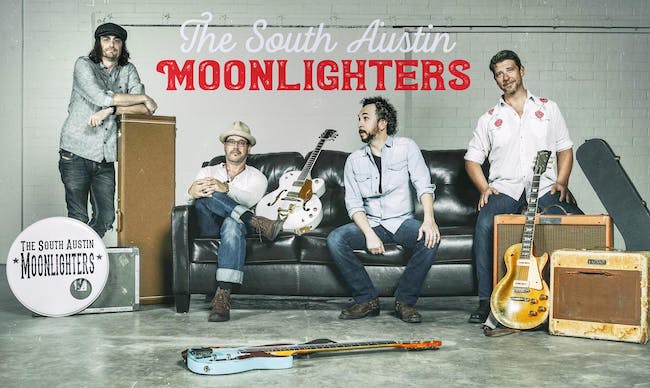 If you’ve seen more than a handful of shows in Texas, there’s a pretty good chance

you’ve already seen most, if not all, of the musicians who make up the South Austin

Moonlighters. These guys have earned their place among the elite of Austin’s

burgeoning music scene and have played key roles in bands like Fastball, Monte

Montgomery, Jimmy LaFave, to name just a few on a long, long list. Harkening back to

a time before pitch-corrected vocals and corporate boardroom-written hits, The South

This “True Americana” band hale from the “live music capital of the world”, Austin Texas,

year; from pop stars to folk icons. It’s in this place that The South Austin Moonlighters

were born and continue to thrive. It all started with a simple question: “Wouldn’t it be

great to get together more often and play music we love?” In 2011, a few friends did just

of shows, and hundreds-of-thousands of miles traveled together.

Moonlighters’ live shows. They are often compared to The Eagles, Little Feat, or Crosby,

Stills, Nash, and Young---but The South Austin Moonlighters are firmly positioned in

today’s culture; writing and performing songs primarily from their own catalogue

“Ghost of a Small Town”, and the highly-anticipated Anders Osborne-produced album

The South Austin Moonlighters are:

“I Love this record [Travel Light]. I am extremely proud of it. I think it’s an amazing

record. The vocal harmonizing on this record; it’s unusual to hear vocals that tight and

that good, and that is [The South Austin Moonlighters]. This Album is one large

statement, and in this case, it’s a great one.” - Producer Anders Osborne

"One of the best live bands in their home city of Austin" -The Boot, Country Music News

"With scenes that alternate between live gigs of the South Austin Moonlighters, and

convincing performances from a husband and wife balancing work, kids, and their

marriage, the video compels you to watch as much as the music and its message invite

you to appreciate those around you. And who doesn’t need to hear a little mandolin

picking with this refrain: “Oh, oh, it’s gonna be all right. Put down your worries and travel

“Success for this Americana ensemble has been about embracing supergroup ethos

while shunning supergroup egos. At their best, the band represents not just what’s right

about the Austin music community but about live music as a whole. And they’re only

serious, with gospel harmonies that evoke Band of Heathens. In fact, like the Heathens,

natured and down to earth.” Jim Caligiuiri, Austin Chronicle

funk, R&B, pop, rock, and more cropping up along the way. DANG dudes! The highest

settling into way more than that from my point of view. The key as I see it is the total