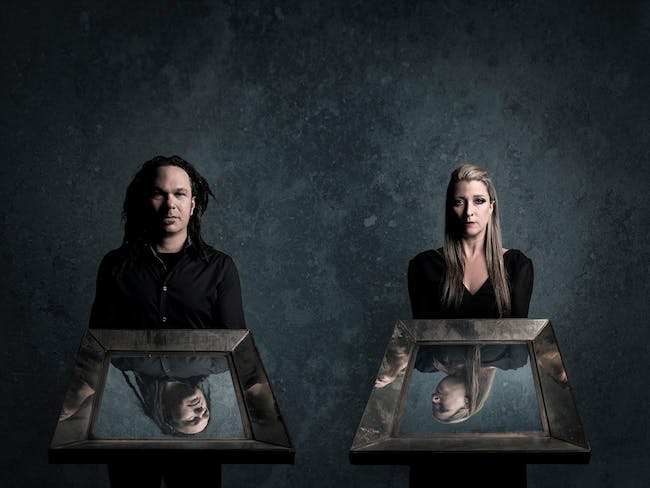 California natives turned Austin mainstays The Belle Sounds have made a name for themselves as seductive folk pop aficionados, creating lush soundscapes intertwined with effervescent harmonies and beautiful lyricism. Their sound at different times will evoke Fleetwood Mac, Neko Case, Aimee Mann, The Shins or Jenny Lewis, and yet they stand out in their own unique sonic space with their effortless melodies, floating guitars and reflective storytelling. Throughout the five years they have called themselves The Belle Sounds, the band has undergone different iterations with various musicians sitting in, recording and performing, but the core of The Belle Sounds has always been frontwoman Noëlle Hampton and her husband, musical counterpart and electric guitarist André Moran.

Their brand new record, “The Sea Within”, comes full circle in the sense that Noëlle and André are back to being the key players, inviting listeners to get swept up in the seductive interplay between their guitars and fall head first into the rich three-part harmonies underneath Noëlle’s powerful and at times very vulnerable lead vocals. The latest record features Noëlle on the electric guitar, acoustic guitar, keys, percussion and lead vocals, André on the electric guitar, original band member Emily Shirley on the keys/synth and harmony vocals. They called on their favorite studio drummer Evan Hutchings to come down from Nashville and local Austinite John Michael (Night Glitter, Charlie Sexton) to play bass. The record also features Kris Nelson on bass and backing vocals on several tracks along with Brian Standefer (Alejandro Escovedo) on cello. Noëlle and André enlisted the help of producer/engineer/keyboard player David Boyle (Patty Griffin, Fiona Apple, Robert Plant, Eddie Vedder, Okkervil River, Shinyribs) at Church House Studio in Austin, TX to help them create an honest, emotional approach to each song and pull the various lyrical themes and grooves together into one cohesive work. “We had heard his approach could be brazen in the studio, and at times it was, but all of that comes from the love he has for the music. He just wants to get it right and know that when you close your eyes and listen that you are going to be having an experience that feels connected and true to your own story,” says Noëlle. Boyle also contributed to the record musically by laying down some vital keyboard and synth parts. “The Sea Within” was recorded throughout the Summer and overdubs/mixing happened through the Fall/Winter of 2017, with additional recording/mixing by André at The Congress House Studio. The record is set to be released July 20, 2018 and is sure to once again mesmerize old and new fans alike.

The Belle Sounds’ journey started in San Francisco where Noëlle and André were each pursuing their own music careers, playing in bands, writing and recording. Upon meeting each other they immediately fell in love, but it wasn’t until Noëlle dissolved the band that she had been performing with and entered a contest to play Sarah McLachlan’s Lilith Fair that she and André started playing music together. Noëlle needed a guitar player for the contest and André agreed to play just that one show. The immediate chemistry and synergy that they felt when playing as a pair resulted in them winning the contest. The media attention that followed opened major doors for Noëlle and André as they were asked to open for a variety of notable artists such as Bob Dylan, Wilco, Chris Isaak, John Hiatt, Richard Thompson, Train, Jewel, Richard Thompson, LeAnn Rimes, Pat Benatar, Jesse Winchester, Graham Parker, among others. They saw their songs placed in film and TV, released three albums under Noëlle’s name and she appeared in the first Apple iTunes commercial alongside such celebrated songwriters as Iggy Pop, Aimee Mann, Jeff Tweedy and Michael Penn. The duo had made a name for themselves in California and beyond, but craved a change in their day-to-day lifestyle.

In the early 2000s they visited Austin while on tour with their band and they fell in love with the city and decided to relocate there permanently.The move to Austin took its toll on both of them, but particularly Noëlle. Exhausted from years of performing and then starting over, she ended up in a deep depression and stopped playing music and writing for a few years. She was creatively stifled and bogged down with the emotional weight of feeling forgotten. It wasn’t until she and André met producer Mark Hallman (Ani Difranco, Carole King, Eliza Gilkyson) that they decided to go back into the studio and start making music together again. They recorded Noëlle’s last record under her name, the critically acclaimed “Thin Line”, which celebrated her newfound influence of a rootsy, Americana sound. The record saw a ton of radio airplay on everything from AAA, Commercial and College Radio to Internet Radio, and was embraced in Europe with substantial airplay as well. The passion and inspiration that came from recording and releasing “Thin Line” had reignited Noëlle’s drive, and the musical connection between this husband/wife team was stronger than ever. In 2013, the couple traveled to East Nashville, TN to work on a batch of songs with a new producer, Neilson Hubbard. Noëlle, André and Neilson, along with a few other players including Evan Hutchings (drums) recorded the eponymous “The Belle Sounds” in a week-long recording session, full of creativity and sonic discovery. Their music had started heading in a new exciting direction and they decided to form a new band, The Belle Sounds. They went on to add more members to the band such as Emily Shirley on keys and vocals, and Harmoni Kelley (Bob Schneider, Kenny Chesney) on bass and vocals. After Harmoni moved to Nashville they were joined by Kris Nelson who fell effortlessly into the sound, covering Neilson’s vocal parts and adding immensely to the rhythm section. Since the groups’ formation, they have accomplished a great deal as The Belle Sounds. In 2013, the band traveled back to Nashville to record their EP, “Black Stone,” which they released in 2014. In 2016, The Belle Sounds were named one of Austin’s “Best New Bands” by the Austin Chronicle Music Poll and The City of Austin even proclaimed April 13, 2017 to officially be “The Belle Sounds Day.” They have performed at ACL Moody Theater, 3Ten ACL Live, One-2-One Bar, The Saxon Pub, Cheer Up Charlie’s and more. Their next creative undertaking, the highly anticipated album, “The Sea Within”, is the first record they have made as The Belle Sounds in Austin.

“The Sea Within” explores many themes that focus on the dynamics of human nature. Tracks like “Inside Out”, “Legend of The Silver Moon”, “When You Lose Someone” and “Olivia” delve into our behavioral struggle as human beings and our various means of expressing emotion, while tracks such as “Safe From Love”, “Setting of the Summer Sun” and “Afterglow” navigate the feelings of unrequited love, newly ended relationships as well as being engulfed in the throws of new love. Other tracks such as “Like a Villain”, “Transcendental” and “Innsaei” (an Islandic word that translates in one form into the album’s title, The Sea Within) draw a strong connection to Noëlle’s personal experience with her intense anxiety and panic attacks and finding means of calming her mind, finding peace within. The record also touches on the political and social state of unrest in the United States right now with songs like “The Informant” and “Inside Out”.

“Since we hadn’t put out a record in a few years, I had been sitting on some songs and writing new material at the same time. We weren’t sure how all of the pieces would come together. I have always loved to write across the board in subject matter. You have to do that when you have been in an amazing relationship for over 20 years. I tend to look outside of myself and take in the stories unfolding around me,” Noëlle explains. While “The Sea Within” touches on various motifs, topics and emotions, it all blends fluidly and effortlessly in an energetic progression with Noëlle’s stunning vocals and the interplay between her and André’s guitar riffs. The record release will without a doubt make waves in the Austin music scene and beyond.