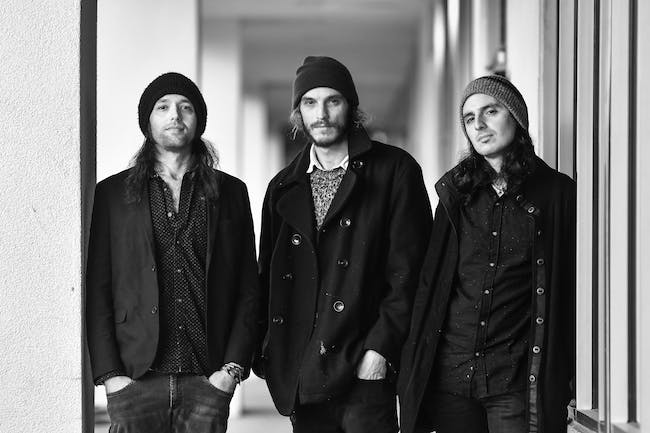 For a long time, singer, songwriter, and guitarist, Matt Gilmour didn’t take life very seriously. He didn’t have to. He was in love, young and healthy, and music was in his genes. However, a series of painful and transformative events found him heartbroken, fighting for his life, and facing some serious realizations.

“After I was diagnosed with cancer, something in me changed,” Matt shares. “I was fed up with who I was, and I knew I needed to start many things in my life from scratch. ”Today, through brave introspection and hard work, Matt has emerged triumphant with his life reclaimed. The English-born, Austin, Texas-based artist is now making music on his own terms with his band of brothers in The Matt Gilmour Band. He’s forging his own legacy with a distinct cinematic psych-rock aesthetic and a ground-breaking live performance streaming series.

The Matt Gilmour Band is an interstellar vehicle that plays psychedelic rock with touches of prog, blues, indie, folk, and funk. The band is a collaborative effort under the banner of The Matt Gilmour Band. “There is no way I could do this without the guys. They’re amazing musicians and amazing friends,” Matt says. In addition to Matt, the band features AJ Vincent on keys, and Mike Hidalgo on drums. The Matt Gilmour Band gigs regionally and nationally, often performing with dazzling light show accompaniment.

Matt was born and raised in England where he grew up watching his father—Pink Floyd guitarist David Gilmour—from the side of the stage as he captivated arena crowds. Eventually, Matt began to solidify his musical chops and forge his own path discovering his identity through traversing a myriad of musical influences. As a signature sound coalesced, and Matt’s talents shined through, he began to write compelling compositions. One track he posted online caught the ear of legendary producer/engineer and Steppenwolf guitarist Danny Johnson who invited

Matt to Austin to record a solo album. That album, The Grey, snapshots Matt in an intimate bluesy folk setting. His early time in Austin was humbling for Matt. He found himself a small fish in a big pond. Totally out on his own, he struggled to make a living. And the various bands he put together kept imploding. Another trying time for Matt occurred when he was diagnosed with cancer at just 26, and he had to move back to England for chemo treatment. In a way, the whole experience galvanized Matt. Upon his full recovery, he returned to the US with a renewed sense of purpose. His clarity of mind showed in his lyrics which became less coded, his band lineups became steadier, and his personal musical vision became more unique.

The Matt Gilmour Band represents a culmination of these profound times of personal and artistic growth. Standouts in the band’s current body of work are “Dear” and “Push.” The track “Dear” patiently unfolds from an airy piano-driven ballad to a majestic rocker with soaring melodies, cathartic hooks, and a fleet-fingered bluesy guitar solo. The grandly ethereal “Push” boasts an imaginative arrangement that feels like a spiritual journey offering a rousing uplifting message. “That song is about those times when we think can’t go any further, and we want to stop or give up. During those times of doubt, I think about my past, and how far I’ve come, and I feel a second wind. I just push through” Matt says. These tracks, and others, are produced and recorded in collective collaboration with producer, and close friend, Chris “Frenchie” Smith from Bubble Studios. The recordings are live-band-to- recording-device—with no Pro Tools editing—and favor groove and humanness over sterile quantized perfection.

Up next, The Matt Gilmour Band are concentrating on its innovative series of streaming performances, the band’s recorded output, and performing live regionally and nationally. At the moment, Matt says, the band is enjoying a wellspring of creativity. “It feels really like everything is taking off now. There is this wonderful unspoken energy and excitement that’s unqualifiable. I am looking so forward to the future,” he says.